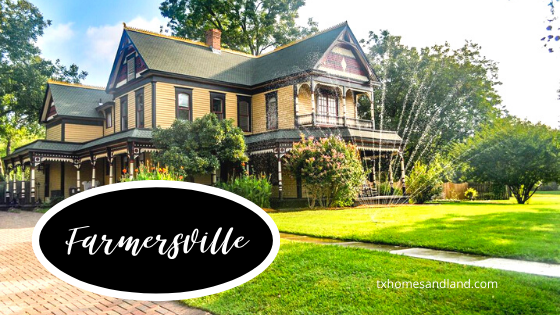 About an hour northeast of Dallas sits Farmersville, an unassuming rural town working to reinvigorate its historic downtown with a combination of tourism and upscale dining.

Just blocks from the city center sits the Murchison Honaker House — dating as far back as 1870 — now renovated with the goal of becoming a bed and breakfast.

The first phase of the Murchison Honaker House was built in 1870 by Rory Murchison as a four-bedroom home for his son and his wife to-be.

According to the house’s website, Murchison’s son died before he was to marry, and the house was rented out until 1884.

It was in 1884 that Henry Dickenson Honaker and his wife, Mary Bain, bought the house and physically moved the house back to allow a new wing to be built in front of it.

Honaker then developed, in essence, an entirely new house in front of the existing four-bedroom home, adding additional bedrooms and a wrap-around porch. Four generations of the Honaker family lived in the home until it was sold in 1968.

Names like Murchison and Honaker are still prevalent in the city in street names and another historical structure, the 1865 Bain-Honaker House, which faces the Murchison Honaker House from across the street.

The home is now owned by Allison and Dwain Mathers, two Tarrant County transplants who bought the home two years ago with the vision to preserve and inhabit the piece of local history. But, making the Murchison Honaker House what it is today was neither easy nor cheap.

Allison Mathers said the house’s previous owners, Rex and Sherry Thain, “basically resurrected the house when they found it in 1990.”

The Thains, she said, restored the porch and repaired plumbing, electrical wiring and the house’s foundation.

Although the house was functional when the Mathers bought it, Allison said work remained to be done. The current owners installed a geothermal HVAC system and got to work preserving history while creating something “Instagram-worthy,” she said.

The house now plays host to weekend getaways, workshops, pop-up events, photoshoots, and art shows. Once the home is rezoned, Allison Mathers said she hopes to explore the possibility of opening the home as a bed and breakfast.

When asked what she has learned about maintaining a 150-year-old home, Allison said the key is “trusting that it’s been here long enough that it can take care of itself.”