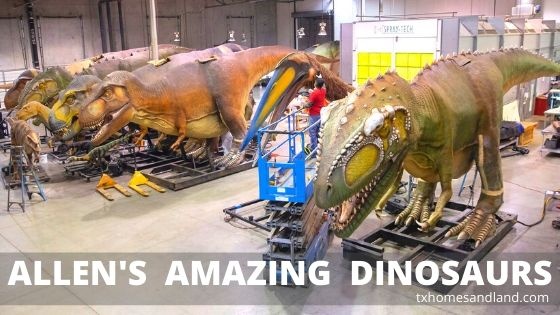 In a nondescript warehouse north of Dallas off U.S. Highway 75, hundreds of dinosaurs of all sizes are shifting around on their haunches and cocking their heads, waiting for the moment they’ll be released into the public.

They’re not quite the animated carnivores that mastermind John Hammond created for Michael Crichton’s Jurassic Park, but these animatronics are as close as modern science and engineering can get to a life-size prehistoric dino.

They were created by Allen-based Billings Productions, which has trademarked the name The Dinosaur Co. It’s the only manufacturer of animatronic dinosaurs and extinct creatures in the U.S.

Inside the 73,000-square-foot Billings warehouse are hundreds of T. rexes, Stegosauruses, Acrocanthosauruses and other beasts, plus some giant bugs, in every stage of assembly.

The machines are capable of moving different limbs via pneumatic pumps, making noise and even darting their eyes back and forth — or, as Billings’ vice president of operations Lauren Billings says, “looking at you like a tasty chicken nugget.”

Billings doesn’t sell the dinos but rather rents them to organizations that align with the company’s message of conservation. They’re popular with zoos, museums and theme parks, which pay six-figure sums to host exhibits for them around the world.

They’ll be on display at ZooTampa in Tampa, Fla., by the end of the month. The zoo has cleverly played up the limited-time event, telling visitors to its site that the dinosaurs will be “extinct again” by the end of May.

Billings said the Heard Natural Science Museum and Wildlife Sanctuary in McKinney was one of the first businesses to partner with The Dinosaur Co. for an exhibit.

INSIDE THE DINO DEN

The company’s 40 workers toil Monday through Friday to breathe life into the colossal robots. From their steel skeletons to their carefully crafted skins, the robots require engineers, sculptors, painters, welders and researchers to assemble and maintain them, making sure their painstaking work reflects the latest scientific knowledge available.

In the warehouse’s sculpting area, creatives carefully attach fur to an animatronic dire wolf — an extinct, prehistoric carnivore — often stringing just 10 strands of hair through the needle at a time.

While the exhibits are awe-inspiring and fun, much of Billings Productions’ work is also driven by a mission to educate the public about wildlife conservation.

“If you don’t take care of what you have now, we’re going to have to make an animatronic of it,” said Billings, as a replica T. rex tooth jostles on a string around her neck.

The dinosaurs travel by land and sea to about a dozen exhibits each year, including in countries as distant as Japan — just not by plane. A single animatronic T. rex can weigh a whopping 3 tons, Billings said.

Started in 2004 by husband and wife team Larry and Sandra Billings, the business is now run by 68-year-old Sandra and their 29-year-old daughter Lauren. Larry Billings died in 2007 just as the company was expanding and gaining more clients, and Lauren says his death galvanized the family to keep the business alive.

“We wouldn’t be here if it didn’t happen because it motivated us,” she said. “When you have a death in the family, it’s really easy to break down and let it consume you, or you can rise up and use it as your strength.”

The company moved to its current Allen facility in 2012 and continued growing and putting on exhibits.

“My dad saw the potential of how much of a difference it made,” Billings said. “You put these in the zoo and you see a kid walk up and their jaw drops. It’s one thing to see this guy in a picture, in a photograph, but to physically see the proportions in person ... it’s just so dwarfing and awe-inspiring.”

In the back of the warehouse sits a roughly 7-foot-tall megalodon head with open jaws filled with rows of 7-inch teeth that an adult human could comfortably walk through. The extinct species of shark was enormous compared with modern sharks and was believed to feed on smaller whales millions of years ago.

Billings has seen many adults rediscover their inner child upon seeing the dinosaurs.

“My dad loved that,” she said.

The company has not only outgrown its last manufacturing space, an old airplane hangar in McKinney, but has now outgrown its Allen warehouse as well.

In the company’s humble beginnings, Billings said, banks refused to provide loans to her parents as they tried to get the business off the ground.

“They were told they were crazy. They couldn’t get bank loans years ago because nobody believed in the business,” she said. “This literally compares to nothing because there’s nothing like it.”

Billings declined to provide revenue figures, citing its status as a privately held company, but several websites estimate that its annual revenue is between $10 million and $20 million.

In August, all of the dinos, prehistoric bugs and animals will move into a new 50,000-square-foot home near Allen’s Watters Creek mixed-use development. Billings expects the new building’s visibility and enhanced capacity to host events will create more jobs. The company created a department in June 2019 to support tours, events and merchandise that it expects will also grow by 150% this year.

Growing with its city
The company’s growth is an encouraging trend for the suburb, where $500 million in commercial projects have been completed in the past two years.

As is fitting for a city of 100,000 people that’s known for its spectacular Fourth of July celebration, Billings is uniquely American. There are a handful of companies that compete with it worldwide, but none that perform their manufacturing entirely in the U.S.

“Allen is an incredible corporate destination, but we’re also a place where people want to raise their families,” he said.

For Lauren Billings, the new facility solves a big problem: its inability to allow members of the public to see its creations. On a daily basis, the welders and engineers work on the huge machines, but they pose too much of a hazard for touring groups of students.

The new facility will have dedicated space to entertain field trips, host events and provide tours that Billings hopes will inspire more people. The company currently charges between $8 and $15 for tours of its facility and the workshops it hosts.

“The kids and adults that come in … you can see their brain kind of explode and fizz for a moment like they just had an internal system lockup," she said. "They’re like ‘everything’s limitless.’ ”