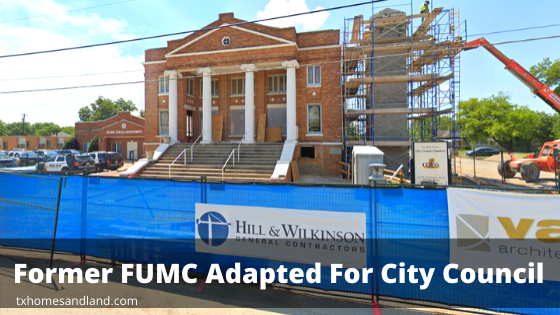 Photo | After months of construction, the Celina City Council will debut its state-of-the-art council chambers for its March 10 meeting, complete with streaming capabilities.

The council meets on the second Tuesday of the month starting at 5 p.m.

The new facility will become the permanent meeting location for the council after the governing body long met at the Celina ISD’s Board Room for their regular meetings. A brief ceremony will help inaugurate the new Council Chambers facility prior to Tuesday’s meeting. The ceremony will include an expression of thanks to the Celina ISD for the use of their facility.

In addition, the renovated facility, converted by the contracting firm of Hill and Wilkinson, is also outfitted with electronic equipment including various wall-mounted cameras and individual microphones that serve to provide a video stream via the internet to anyone wishing to follow meetings either in real-time or at a more convenient time via the video archiving of meetings that will be available.

“We’ve been talking for some time about expanding the ability of residents to participate in not just council meetings, but in as many public meetings as possible,” City Manager Jason Laumer said. “This renovated facility is not only a part of Celina’s long history, it has now been converted to a state-of-the-art facility in every respect, and we believe it will allow our residents to better connect with council and the various boards that serve Celina.”

Meetings of the various boards and commissions that serve in advisory capacities to the City Council in areas such as Planning and Zoning, and Library Services, among several others will also use the facility to conduct their public meetings. Significantly, the facility has been designed to serve the community for public meetings and special events. For example, if rain threatens Movie Night on the Square, the facility can serve as an alternative venue.

Moreover, the Council Chambers facility will also accommodate numerous city employees who have been officing in the modular building on the south side of the police headquarters. Employees in Development Services, Engineering, Building Inspections, and other support functions will be moving into the newly refurbished building over the next few weeks.

“The Council Chambers facility has maintained its impressive exterior and now stands poised to enter its new phase of service to Celina residents. It also sends a very clear message about the city’s unqualified commitment to investing in downtown,” Laumer said.