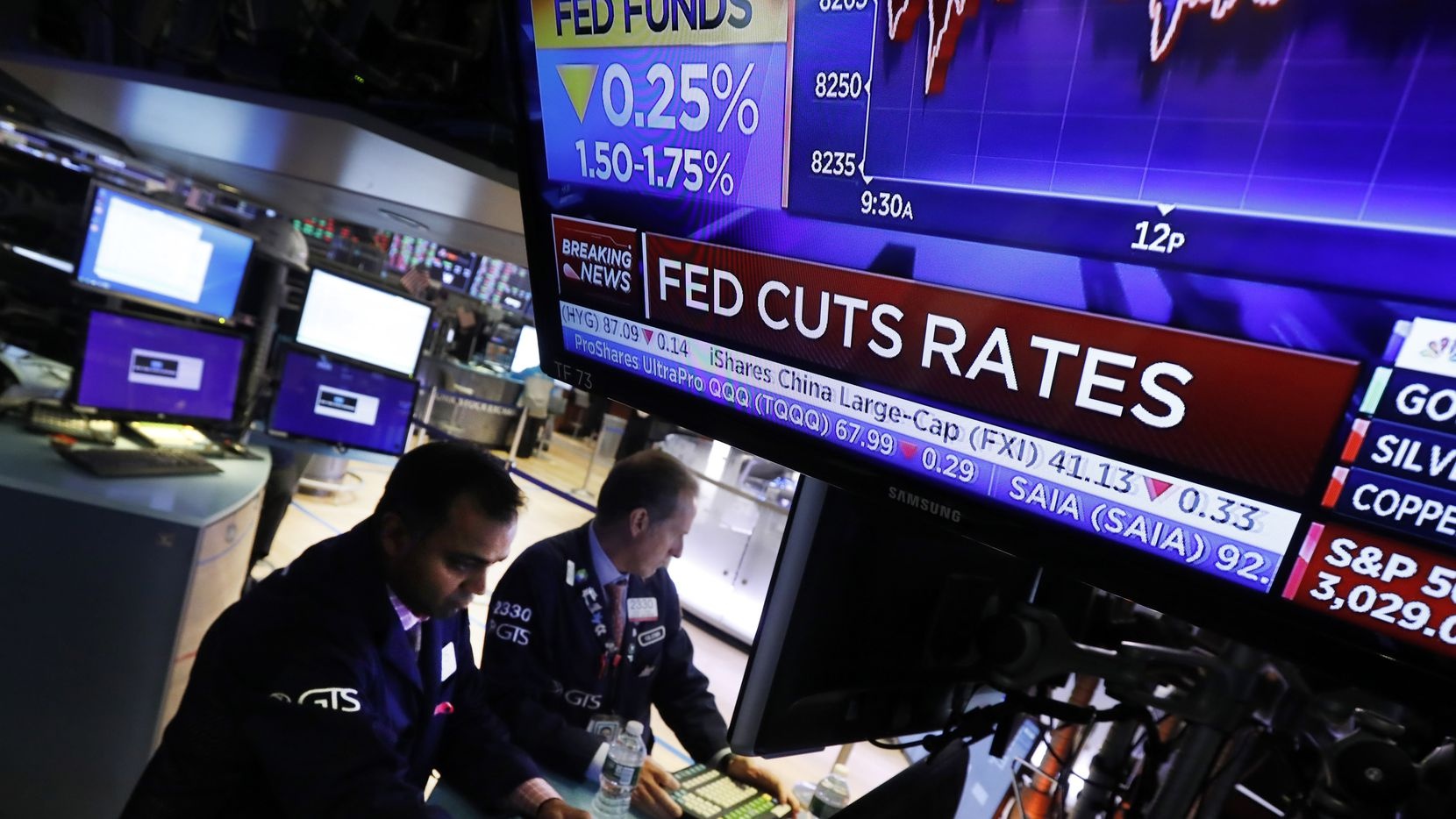 By The Associated Press

The Federal Reserve cut its benchmark interest rate Wednesday for the third time this year to try to sustain the economic expansion in the face of global threats. But it hinted that it won’t likely cut again this year.

The Fed’s move reduces the short-term rate it controls — which influences many consumer and business loans — to a range between 1.5% and 1.75%.

A statement the Fed released after its latest policy meeting removed a key phrase that it has used since June to indicate a future rate cut is likely. This could mean that Fed officials will prefer to leave rates alone while they assess how the economy fares in the months ahead.

The economy is in its 11th year of expansion, fueled by consumer spending and a solid if slightly weakened job market. By cutting rates, the Fed has tried to counter uncertainties heightened by President Donald Trump’s trade conflicts, a weaker global economy and a decline in U.S. manufacturing.

The third rate cut of the year has partly reversed the four hikes that the Fed made last year in response to a strengthening economy. That was before rising global risks led the Fed to change course and begin easing credit. Lower rates are intended to encourage more borrowing and spending.

Chairman Jerome Powell has said that the central bank’s rate reductions are intended as a kind of insurance against threats to the economy. Powell has pointed to similar rate cuts in 1995 and 1998 as precedents; in both those cases, the Fed cut rates three times. He and most other Fed officials credit their rate cuts with lowering mortgage rates, boosting home sales and generally keeping the economy on track.

The Fed is also weighing the consequences of a decline in expectations for inflation. Lower inflation expectations can be self-fulfilling. This can pose a problem for the Fed because its preferred inflation gauge has been stuck below its 2% target for most of the past seven years.

In the meantime, Trump, via Twitter, has renewed his attacks on the Fed for not lowering its benchmark rate closer to zero. The president has contrasted the Fed’s actions unfavorably with central banks in Europe and Japan, which have slashed their rates into negative territory. Though Trump has argued that this puts the United States at a competitive disadvantage, most economists regard negative rates as a sign of weakness.

Some international tensions have eased since the Fed previously met in mid-September, which might suggest to some that further rate cuts are less necessary. The U.S. and China reached a temporary trade truce earlier this month and are working on a preliminary agreement that could be signed soon by Trump and President Xi Jinping. It’s not clear, though, how meaningful such an agreement might be, and Trump hasn’t dropped his threat to impose new tariffs on Chinese goods on Dec. 15.

Another source of global tension has been Brexit, which has also eased. The European Union has agreed to delay the deadline for Britain’s exit from the trade bloc from Oct. 31 to Jan. 31. That postpones what could have been a hugely disruptive exit, right after the Fed meeting ended, that would likely have damaged the U.K. and European economies.

The U.S. economy is still growing, and hiring remains steady, though there have been signs of a slowdown in recent data. Americans cut back on spending at retailers and restaurants last month, a worrisome sign because consumer spending is the leading engine of economic growth. Still, consumer confidence remains high, and shoppers could easily rebound in the coming months.

And businesses have reduced their spending on industrial machinery and other equipment, mostly because the U.S.-China trade war has made them reluctant to commit to big purchases. The tariffs and retaliatory tariffs between the U.S. and China, the world’s two largest economies, have also reduced U.S. exports.

Earlier Wednesday, the government estimated that the economy grew at a tepid but steady 1.9% annual rate during the July-September quarter.

The job market remains sturdy, with the unemployment rate at just 3.5%, the lowest in 50 years. On Friday, the government will report on employment growth for October. Steady hiring and decent wage gains should help underpin consumer spending in coming months, keeping the economy expanding. That could keep the Fed on the sidelines.

The housing market has also improved, after slumping in 2018, thanks in part to the Fed’s rate cuts. Mortgage rates have fallen more than a full percentage point from a year ago, on average, for a 30-year fixed rate loan.

What the Fed said about its decision

Below is the statement the Fed released Wednesday after its policy meeting ended:

Information received since the Federal Open Market Committee met in September indicates that the labor market remains strong and that economic activity has been rising at a moderate rate. Job gains have been solid, on average, in recent months, and the unemployment rate has remained low.

Although household spending has been rising at a strong pace, business fixed investment and exports remain weak. On a 12-month basis, overall inflation and inflation for items other than food and energy are running below 2 percent. Market-based measures of inflation compensation remain low; survey-based measures of longer-term inflation expectations are little changed.

Consistent with its statutory mandate, the Committee seeks to foster maximum employment and price stability. In light of the implications of global developments for the economic outlook as well as muted inflation pressures, the Committee decided to lower the target range for the federal funds rate to 1-1/2 to 1-3/4 percent.

This action supports the Committee’s view that sustained expansion of economic activity, strong labor market conditions, and inflation near the Committee’s symmetric 2 percent objective are the most likely outcomes, but uncertainties about this outlook remain. The Committee will continue to monitor the implications of incoming information for the economic outlook as it assesses the appropriate path of the target range for the federal funds rate.

In determining the timing and size of future adjustments to the target range for the federal funds rate, the Committee will assess realized and expected economic conditions relative to its maximum employment objective and its symmetric 2 percent inflation objective.

This assessment will take into account a wide range of information, including measures of labor market conditions, indicators of inflation pressures and inflation expectations, and readings on financial and international developments.

A television screen on the floor of the New York Stock Exchange shows the rate decision of the Federal Reserve, Wednesday, Oct. 30, 2019. The Federal Reserve has cut its benchmark interest rate for the third time this year to try to sustain the economic expansion in the face of global threats. (AP Photo/Richard Drew)(Richard Drew)