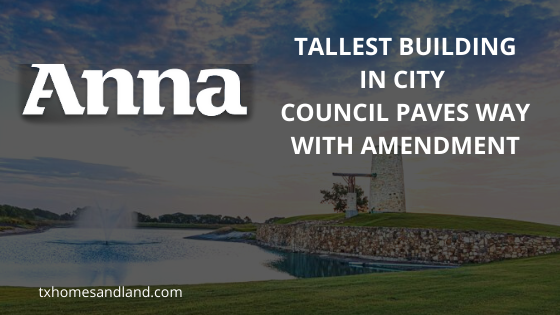 ANNA - During its meeting Tuesday night, the Anna City Council approved a zoning amendment that will help construct the city’s tallest building.

The vote paves the way for a four-story multi-family residence on 9.1 acres at the future intersection of Standridge Boulevard and Suzie Lane.

It will be situated on the western portion of an 81.8-acre mixed-use development near the northwest corner of U.S. Highway 75 and FM 455.

When completed, it will feature approximately 330 multi-family units.

Under terms negotiated between the city and developers, the units will be set back a minimum of 475 feet from the center of U.S. 75 in order to preserve desirable commercial pad sites. There will also be no patios or balconies facing the highway.

According to Economic Development Director Joey Grisham, the plan benefits the city because it will allow more diverse housing options within Anna. It will also help to drive density, which should help to attract more businesses and restaurants on the city’s west side.

“It’s a $35 million investment which averages out to over $250,000 a year in property tax revenue,” Grisham said. “That does not include sales taxes or any other taxes that we will get as a result of the project.”

The city, in turn, has imposed strict timelines to ensure that the project is quickly built as planned.

According to developer applicant Nathan McCartney, those moving to the new residences are expected to have a $7.5 million economic impact on the local economy.

He said preliminary testing has already been completed with engineers to ensure there will be no issues with excess rainwater runoff.

For those who voiced concerns about multi-family units generating more crime, McCartney said that it is actually a misconception. The statistics show that there is no difference in crime numbers between single-family dwellings and multi-family units.

Mayor Nate Pike said that in the future, Anna will not have to provide incentives for developers to build here. However, in order for the city to attract larger restaurants and stores, it must first build density and attract more people.

He believes this project will open up more opportunities, particularly for the west side of the city. It will also provide a solution for the people who might want to live in the city but cannot afford a home here.

“I see this as a major opportunity to move forward some of the things are citizens are saying they want,” Pike said.