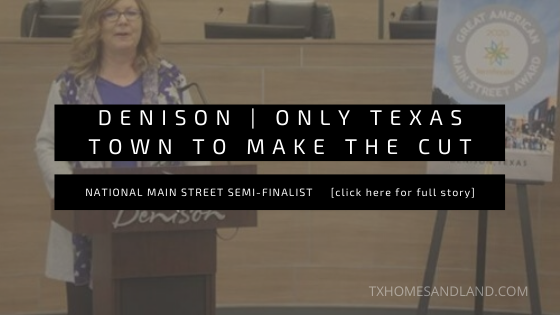 Denison has joined seven other cities in being named a semifinalist in the Great American Main Street Awards.

The city celebrated its 30th year being a part of the Texas Main Street program last year. As a part of that celebration Mayor Janet Gott and Downtown Director Donna Dow organized a campaign to get the city nominated for the 2020 GAMSA awards.

“We are beyond excited,” Gott said during an announcement ceremony Tuesday. “We know we have a special and unique community. But it is amazing to have that validation from someone who is looking at communities across the nation. They are looking at communities that have Main streets that are on the leading edge doing initiatives to create additional commerce on their Main Street. If we don’t have the businesses on Main Street, we don’t have a Main Street. There are so many initiatives we do together as a a city, through economic development and the chamber, that support these businesses.”

The other cities that made the cut are Boyne City, Michigan; Congress Heights, Washington D.C.; Evanston, Wyoming; Greater Ashmont Boston, Massachusettes; Jeffferson, Iowa; Kendall Whittier Tulsa, Oklahoma; and Tupelo, Mississippi. Gott said being among the semifinalists says a lot for the community.

“We believe we’re doing the right things,” Gott said. “As someone to recognize we have something that sets us apart form others is certainly a validation that we’re making the right decisions.”

Work up to this point has been a collaboration of many people.

“Denison Main Street is as awesome as we think it is,” Denison City Manager Jud Rex said.“We have such a great story to tell when it comes to what happens on Main Street and the people involved. 2019 was a big year for the Denison Main Street. We celebrated our 30th anniversary. We saw some significant milestones in terms of revitalizing downtown. Hotel Denison was purchased for redevelopment. It has been a great year. This is frosting on the cake for the city.”

Denison Main Street Director Donna Dow said the finalists will be announced May 17-20 at a conference in Dallas. The city will host a tour that week to show off the downtown.

“It has been 20 years since Texas has had a winner,” Dow said. “We would like for the next one to be Denison. The two Texas cities were Denton and Georgetown in the 90s. Just to put us in the same conversation with them is an honor. Every downtown is special. We feel ours stands right there at the very top. It was really fun this year as we tried to quantify how we do.”

Dow said it is going to be hard to top the city’s recent accomplishments. Denison said the city has over 200 independently owned businesses. She said there were 681 events annually hosted in the district.. She said the city has the longest Main Street district in the state. Another feature Dow highlighted is the 144 pieces of public art downtown. She said the strength of the downtown is the citizens that make up the community.

“Denison offers a myriad activities with no economic barriers,” Dow said. “This past year brought nearly 100,000 people downtown to events hosted by Main Street and its partners.”