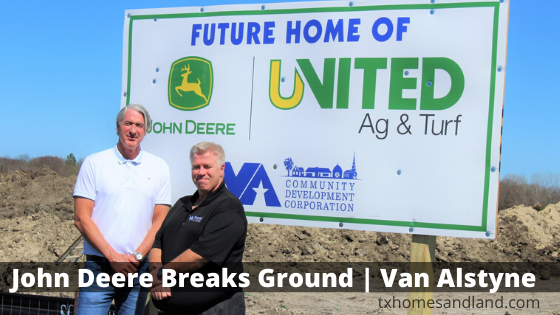 One of the largest commercial-retail ventures to come into Van Alstyne has broken ground on what will constitute the biggest operation in United Ag & Turf’s impressive portfolio.

United Ag & Turf John Deere has begun infrastructure and groundwork on its newest store to be located on U.S. Highway 75 in Van Alstyne. United Ag & Turf has 29 locations across Texas, Oklahoma, and Arkansas, servicing the agriculture sector, the landscaping industry, and residential homeowners alike. The Van Alstyne location will be the company’s largest yet, set to encompass 45,000 square feet of space to include new and pre-owned sales as well as a large, full-service bay and mobile mechanics who will operate out of the location, assisting farmers and ranchers outside the City. The facility will be situated on Highway 75 just north of County Line Road. The new operation will be the largest in the United Ag & Turf portfolio, a portfolio that makes United Ag & Turf one of the top-10 largest John Deere dealers in all of North America.

“Construction on our new, state of the art, 45,000 square foot facility has begun in Van Alstyne. The City’s leaders, the Community Development Corporation, and the City’s engineers have been a pleasure to work with and were instrumental in United Ag and Turf’s decision to make this large investment into the City of Van Alstyne,” said United Ag & Turf CEO Brody Pettit. “We look forward to being a valuable and responsible corporate citizen to this community and the surrounding area when the project is completed in the Spring of 2021.”

United Ag & Turf is closing its operation in McKinney and consolidating operations in Van Alstyne. All current employees will be transferred to Van Alstyne or relocated to the Dallas region.

The Van Alstyne Community Development Corporation, a non-profit 4B corporation funded by public sales tax dollars, worked with Pettit and company to help make the proposed project a reality.

“It’s exciting to see this project break ground,” said VACDC Executive Director Rodney Williams. “A number of people have put time and energy into making United Ag & Turf in Van Alstyne a reality. Seeing all the groundwork, the manpower, the steel being shipped in, it drives it all home what a large, important project this is for United Ag & Turf, John Deere and the City of Van Alstyne.”