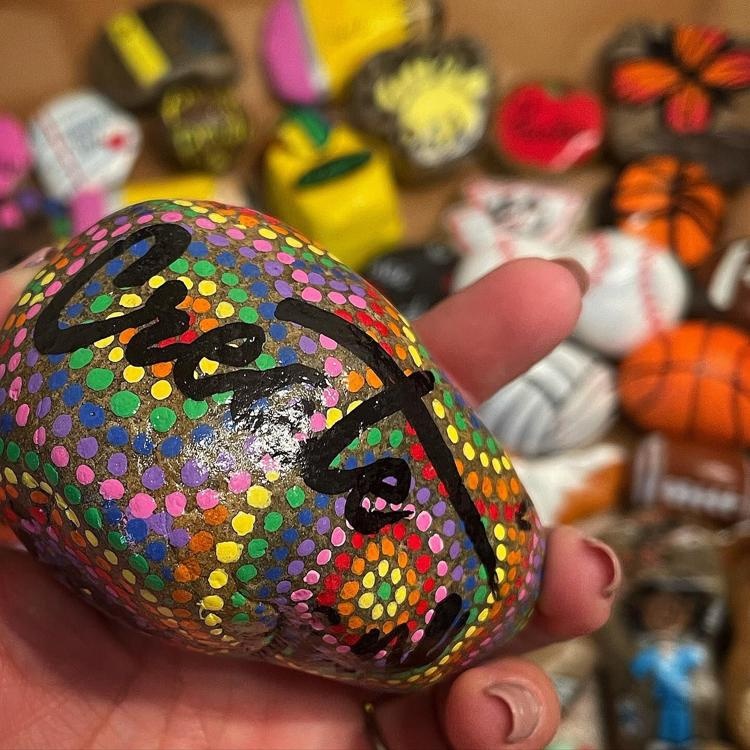 MCKINNEY, TX - When it comes to getting the right kind of rock, Amanda Arganbright will tell you a large smooth one is a good way to go. You could buy a bag of rocks at the store, but make sure they don’t have an ultraviolet filter on them一that will gum up the paint markers.

Once you find the right rock, all you need is some cheap acrylic paint and a little imagination. Oh, and maybe some polyurethane. “That way the acrylic doesn’t scratch off, because it comes off pretty easy,” Arganbright said.

Since around March, Arganbright and her kids have been in the business painting rocks with positive messages or colorful designs and then hiding them around McKinney for others to find. Arganbright moved to McKinney in August 2020 in the midst of a pandemic that left her two young children at home without much else to do other than spend time on electronic devices. “I was just constantly looking for something to keep them off of electronics for any amount of time, just because that was all they seemed to be doing,” she said.

Then she remembered Grand Haven, Michigan. It’s in that city where a community has formed around the same idea: painting positive messages on rocks and hiding them around town. Finders can choose to either keep the rocks they find or re-hide them for someone else. Arganbright said sometimes the rocks may end up in other states as vacationers take them home. A “Grand Haven Rocks” Facebook group has garnered 3,600 members since 2017. “I thought, you know, why not start something up around here since they don’t have a lot going on and they can’t go out and play with COVID and all of that?” she said.

A former McKinney group with the same idea seemed to have gone dormant, Arganbright said, so she started up her own, adding in the title a call to “spread joy.” Since late May, it has gained over 200 members including about 40 in the past week. “It’s positive and it’s upbeat and with all the negative everything from political to just the chaos right now, I think that’s what kind of gets everyone’s attention and then makes them want to continue to do it, because it’s just...it’s just something nice and it just makes you feel good,” she said.

They typically hide 40 to 70 rocks at a time. They’ve mostly hidden them downtown, but their efforts have since evolved to include school areas on a couple of occasions.

The social media group includes pictures of rocks resting on a bench, hiding on a state historical marker or even on a construction cone.

“For the most part, I just kind of put them where I know someone will see it, but it’s not super obvious, like right in the middle of the street or anything,” Arganbright said. “So they’re just kind of walking and it’s just a nice little surprise.”