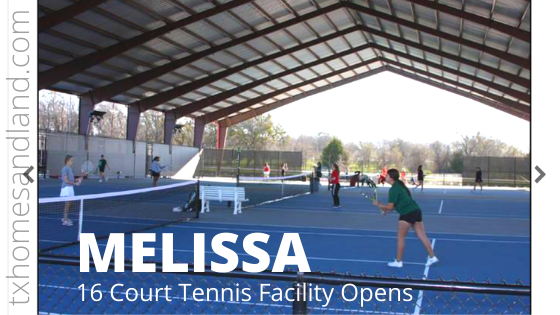 And what better way to christen the place than with the inaugural Melissa Cardinal Invitational tournament?

Looking out at the maze of activity spanning the impressive 7-acre venue, third-year Melissa head tennis coach Brad Crawford smiled as he recalled the planning and determination that went into making this day a reality.

“It’s just so exciting to see it all come to fruition,” he said. “It’s a magnificent facility. And the school board, the superintendent and the community have just been so supportive.”

Five teams participated in this grand-opening event, including Melissa, Argyle, Pottsboro, Mesquite Poteet and The Colony. “This tournament will grow,” Crawford said. “There will be people clamoring to get into it. It’s a great place.”

“It’s state of the art,” said senior John Lewis, the Cards’ No. 1 singles player. “It’s actually one of the best facilities I’ve been to. I’ve been to some colleges and they don’t have courts as nice as this. You’ve got 12 courts, which is more than most have. Most have eight. Plus you have covered courts, which is going to be very useful for us because it rains a lot. ... Our coaches are getting messages over and over from coaches wanting to play here next year.”

Said senior Sierra Thomas, “I’m super-excited about it. I think it’s a good opportunity for us to grow as a team and get better. I think the freshmen have a good chance to grow on the courts together and really be successful.” Regarding the covered courts, Thomas said, “That’s going to be a huge advantage for us. We’re the only school around that has it.”

The Z-Plex was already a regional baseball and softball destination with five state-of-the-art fields. Now the nearly three-year-old home to Melissa High School sports is crowned with a tennis gem that will make the area even bigger draw. The Z-Plex is owned by the City of Melissa. Melissa ISD partnered with the City to build the Cardinal baseball and Lady Cardinal softball fields - and now the tennis complex. Use of the facilities by groups other than MISD schools is managed Melissa Sports, LLC.

The general contractor for the tennis facility was Piazza Construction.

The covered courts are already proving popular to schools that otherwise would’ve had their tournaments rained-out, Crawford noted. He added that a regional-qualifier event is already slated for April 24 and a Princeton-Melissa USTA Challenger will take place on June 6. “I think word will get out quickly about what a great facility it is,” he said.

As for his current team, Crawford said, “We’re really strong this year. I’ve got five senior boys in my top eight and I’ve got two senior girls. I’m hoping that we’ve got a real shot to get a number of people to regionals and maybe some people to state this year. We’ve got a long road, but we’re going to work at it.”

Besides Lewis, Melissa’s senior boys include Jake Fowler, Zach Butterfield, Wilson Gustaveson and Noah Strickland. Crawford is already looking ahead to rebuilding when they – and Keeton and Thomas – have graduated.

“Anytime you graduate seven seniors it’s a blow,” he said. “We’ve got a good foundation and it’s just going to be a matter of us bringing along our younger kids and getting them ready to play. ... We’re going to do our best. We’re going to keep working hard. We’ve got a great facility here so we’ll be working all summer long and getting ready.”