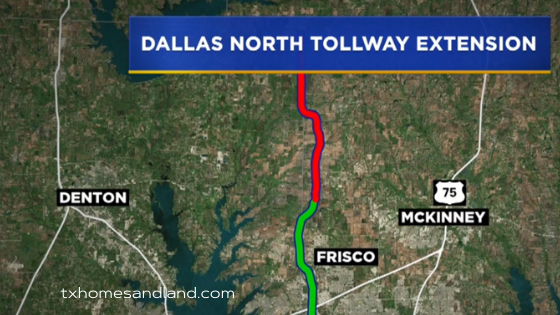 DALLAS, Texas (CBSDFW.COM) — Construction to extend the Dallas North Tollway into one of the fastest growing parts of the metroplex has begun.

The North Texas Tollway Authority is building a bridge to extend the Dallas North Tollway over U.S. 380 into the town of Prosper. Ultimately, the project will bring the tollway all the way to FM 428 in Celina.

“I mean I’ll be ready for the construction to be done, but I think it will be good,” said Renee Wiggins, who lives in Prosper.

The interchange over the bridge on U.S. 380 will cost about $90 million. Another $100 million will go towards widening the Dallas North Tollway leading up to that point.

Extending the tollway another six miles or so into Celina will cost an additional $350 million.

“So all in, $550 million we’re investing in that region to get the growth going and get people where they’re going,” said Michael Rey with NTTA.

NTTA expects new development along the extension to follow construction, but some worry that will only increase congestion in the area.

“It would bring in more communities close by and there would be more population and it would definitely add on to the traffic,” said Sujit Surendran Pillai, who takes the Dallas North Tollway every day.

Others are excited about what the tollway could bring.

“I think it will be great,” said Theresa Milliman, who lives in Allen.

NTTA believes the project will ultimately ease congestion in Frisco and Prosper, but for now, drivers will have to deal with the construction.

“We’re going to see a lot of activity in the next half decade or so on the Dallas North Tollway,” Rey said.

He urges drivers to pay attention when they’re going through construction zones and to give crews plenty of room to work. Construction on the bridge to Prosper should be done by the end of 2022.