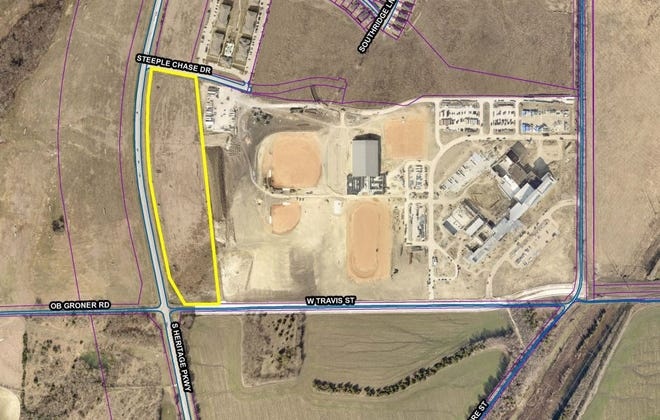 The City of Sherman is looking to sell 15 Acres of land adjacent to the new Sherman High School site. [courtesy photo]

SHERMAN, TX - Sherman could soon see a $3.65 million payday from the sale of land along one of the city's burgeoning corridors. City leaders recently said that the city is currently in negotiation to sell 15 acres of land that it owns that is adjacent to the intersection of West Travis and FM 1417.

The land that the city is looking to see was unused during the construction of the high school and subsequently retained by the city through and agreement with the Sherman Independent School District. City representatives said the land is expected to sell for significantly more than what the city initially invested in it.

"We are glad to be selling this property and putting the money to use for other general fund project purposes," City Manager Robby Hefton said.

The city put the land out for bid earlier this year in anticipation of the sale. The city received a single bid for $3.65 million from Harkinson Management, LLC, who has been a driving force behind the Sherman Crossroads development along the intersection of FM 1417 and U.S. Highway 75.

The city council received a request money to grant Hefton the ability execute a contract for the sale of the land once an agreement is finalized. However, the council instead voted to table the request until they can see a finalized version.

Some details, including a clause in the draft version that allows the  developer to transfer the contract, are still in discussion.

City leaders have said for some time that the property could be a major boon for the city as the corridor, and the areas surrounding the high school, are expected to be in high demand as development in Sherman moves south and west. Community and Support Services Manager Nate Strauch said the city expects that the land will be developed into some kind of retail, but he could not confirm what kind it is expected to be.

"There certainly could be a gas station and convenience store on the hard corner there," he said. "Even being close to a high school, we would feel it is a natural fit for fast food. Overall, it would be up to the developer at this point."

Given the cost, Strauch said the sale is turning out to be a major win for the city. When the city initially purchased the land, along with the current high school site, it invested $3.3 million, which was offset by $2.7 million from the district.